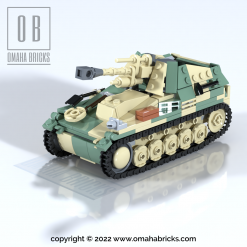 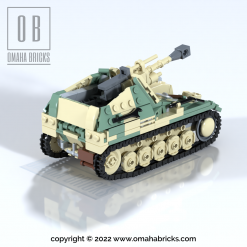 Informations about the model:
Total Bricks: 440 (including track links)

To complete this model you can use the following third party elements:
– 92 single wide track links. You can use the orignal Lego 3711 part or use them from BrickMania, Bluebrixx or any other company you prefer.

The Sd.Kfz. 124 Wespe is a German self-propelled gun developed and used during the Second World War. It was based on a modified Panzer II chassis. The Wespe first saw combat in 1943 on the Eastern Front. It proved very successful, and Hitler ordered all Panzer II chassis production be dedicated to the Wespe alone.

Be the first to review “Wespe Instructions” Cancel reply