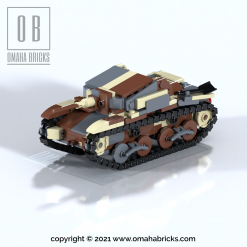 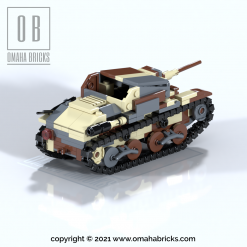 Total Bricks: 357 (including the tracklinks)

The Type 5 light tank Ke-Ho was a prototype light tank developed by the Imperial Japanese Army at the end of World War II. Mass production was authorized in 1945, by which time it was too late. Production was impossible due to shortages of materials such as steel, and the bombing of Japan. Only a single prototype was completed by the Hino Jido Sha company by the end of World War II.

Note: This purchase is for the building instructions and a graphic and numbered parts list in pdf format and a xml file, to create an easy Bricklink wishlist, only.

For the single wide tracklinks needed for this model, you could buy tracklinks from Lego (included in the parts list), BrickMania, Brickizimo, BlueBrixx or CustomBricks (or maybe an other company that makes them?)