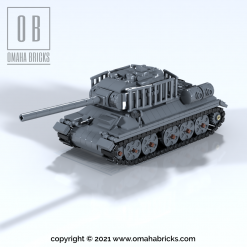 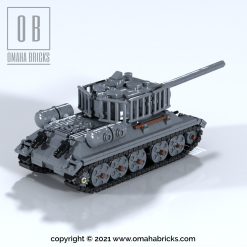 Total Bricks: 732 (this includes the tracklinks)

The T-34 is a Soviet medium tank introduced in 1940, famously deployed during World War II against Operation Barbarossa. It had an unprecedented balance of firepower, mobility, protection and ruggedness. The T-34 had well-sloped armour, a relatively powerful engine and wide tracks. The T-34/85 was the final modification of the T-34 tank of 1943. A new three-man gun turret allowed a more powerful 85-mm gun to be mounted. This greatly increased the combat effectiveness of the tank compared to its predecessor, the T-34-76. A total of more than 35,000, in several variants, were produced. Today the tank is still in service in several countries.