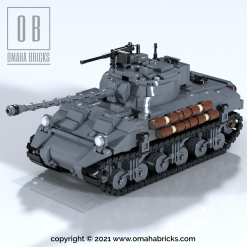 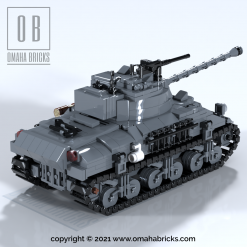 Total Bricks: 823 (including the tracklinks)

To complete this model you can use the following third party elements:
– 116 double wide track links. You can use them from BrickMania, Bluebrixx or any other company you prefer.

The Sherman Firefly was a tank used by the United Kingdom and some Commonwealth and Allied armoured formations in the Second World War. It was based on the US M4 Sherman, but fitted with the powerful 3-inch (76.2 mm) calibre British 17-pounder anti-tank gun as its main weapon. The Firefly was put into production in early 1944, in time to equip Field Marshal Montgomery’s 21st Army Group for the Normandy landings. It soon became highly valued, as its gun could almost always penetrate the armour of the Panther and Tiger tanks it faced in Normandy, something no other British Army tank could reliably do at that time. In recognition of this, German tank and anti-tank gun crews were instructed to attack Fireflies first. The nickname “Firefly” was adopted due to the bright muzzle flash of the main gun.