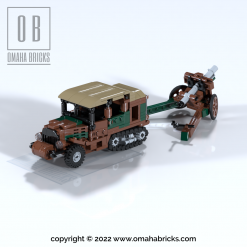 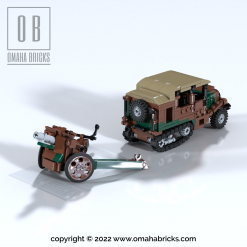 Informations about the model:
Total Bricks: 377 (Including tracklinks)

To complete this model you can use the following third party elements:
– 40 single wide track links. You can use the orignal Lego 3711 part or use them from BrickMania, Bluebrixx or any other company you prefer.

The P107 was a World War II French half-track. During World War II, the Germans used these captured half-tracks extensively under the name leichter Zugkraftwagen 37 U304(f) to tow various anti-tank guns.
The Canon de 105 mle 1913 Schneider was a French artillery piece used in World War I and World War II by many European countries.

Note: This purchase is for the digital building instructions and a graphic and numbered partslist in pdf format and a xml file, to create an easy Bricklink wishlist, only.