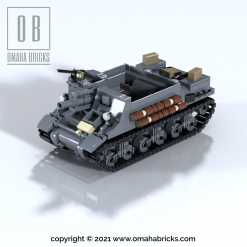 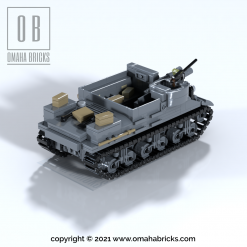 The 105 mm Howitzer Motor Carriage M7 was an American self-propelled artillery vehicle produced during World War II. It was given the official service name 105 mm Self Propelled Gun, Priest by the British Army, due to the pulpit-like machine gun ring, and following on from the Bishop and the contemporary Deacon self-propelled guns. During the Second World War the M7 saw action in Africa, Europe and the Pacific. A total of 3,489 M7s were built. They proved to be reliable weapons, continuing to see front-line service in the US and other armies well past the end of World War II.M7 Priests remained in use during the Korean War. Israel even acquired a number of M7 Priests during the 1960s and employed them in the Six-Day War, the War of Attrition and the Yom Kippur War.

There is also a stickerpack available that can be used on this model like the “Crates and Barrels” pack, or you can use the “Easy Eight” pack as well. Check them out here.

Be the first to review “M7 Priest Instructions” Cancel reply