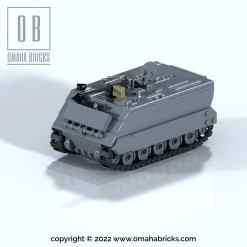 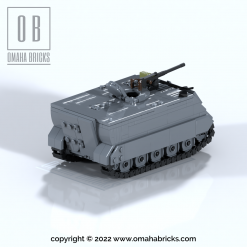 Informations about the model:
Total Bricks: 445 (including track links)

To complete this model you can use the following third party elements:
– 84 1.5 wide track links. You can use them from BrickMania, Bluebrixx or any other company you prefer.
– 1 BrickArms M2HB Machine Gun.

The M113 is a fully tracked armored personnel carrier that was developed and produced by the FMC Corporation. The M113 was sent to United States Army Europe to replace the mechanized infantry’s M59 APCs from 1961. The M113 was first used in combat in April 1962 after the United States provided the South Vietnamese Army (ARVN) with heavy weaponry such as the M113. The M113 was the most widely used armored vehicle of the U.S. Army in the Vietnam War and was used to break through heavy thickets in the midst of the jungle to attack and overrun enemy positions.