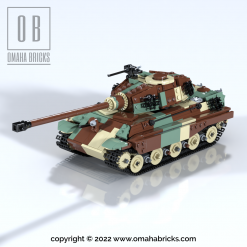 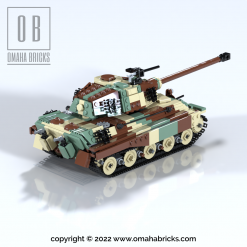 Informations about the model:
Total Bricks: 921 (including track links)

The Tiger II is a German heavy tank of the Second World War. The final official German designation was Panzerkampfwagen Tiger Ausf. B. The ordnance inventory designation was Sd.Kfz. 182. It is also known under the informal name Königstiger (the German name for the Bengal tiger) that translates to King Tiger. The King Tiger was issued to heavy tank battalions of the Army and the Waffen-SS. It was first used in combat by 503rd Heavy Panzer Battalion during the Allied invasion of Normandy on 11 July 1944; on the Eastern Front. After that the King Tigers saw action in many places in Europe.