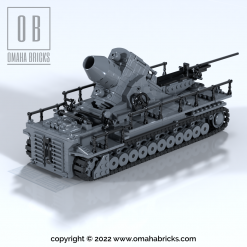 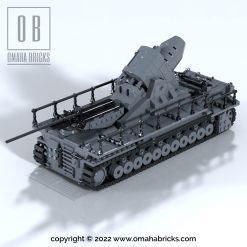 Informations about the model:
Total Bricks: 1485 (including track links)

To complete this model you can use the following third party elements:
– 166 Double wide track links. You can use them from BrickMania, Bluebrixx or any other company you prefer.

“Karl-Gerät” was a World War II German self-propelled siege mortar designed and built by Rheinmetall. Seven guns were built, six of which saw combat between 1941 and 1945. It was used in attacking the Soviet fortresses of Brest-Litovsk and Sevastopol, bombarded Polish resistance fighters in Warsaw, participated in the Battle of the Bulge, and was used to try to destroy the Ludendorff Bridge during the Battle of Remagen. One Karl-Gerät has survived and the remainder were scrapped after the war.