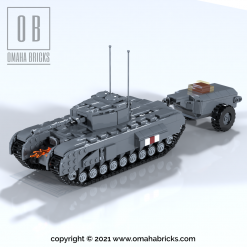 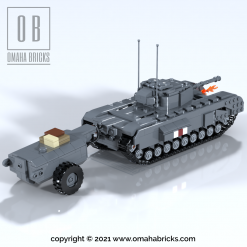 To complete this model you also need the following third party elements:
– 136 double wide track links. You can use them from BrickMania, Bluebrixx or any other company you prefer.

The Churchill was a British heavy infantry tank used in the Second World War, best known for its heavy armour, large longitudinal chassis with all-around tracks with multiple bogies, its ability to climb steep slopes, and its use as the basis of many specialist vehicles. It was one of the heaviest Allied tanks of the war. The Churchill was used by British and other Commonwealth forces during the North African, Italian and North-West Europe campaigns. The Churchill Crocodile was a flame-throwing version of the Churchill.

Be the first to review “Churchill Crocodile Instructions” Cancel reply